I’m not as in tune with water temperatures as I am the air.

For one I’m not swimming in the gulf these days, which by “touch of the toe” is my main barometer. Swimming season for me in the gulf is from April to November, after which the combination of cooler water and air keeps me high and dry on the beach.

January and February mark the “cold-water ebb” for water in the northern hemisphere.

Of course the gulf got particularly cold this January. There were widespread reports of water falling below 50 degrees. That’s almost a full twenty degrees warmer than the air fell, but frigid by Florida marine standards. Fish, manatee, turtle, and coral communities have all taken a toll.

Waters have been slowly warming, but with a lag time behind the air. It’s only now that waters are breaking back near the manatee comfort zone of 68º F.

Come summer of course the gulf warms into a tepid pool of bathwater. The Naples Beach gage rises into the high 80s … but by touch in the shallows it even feels warmer. 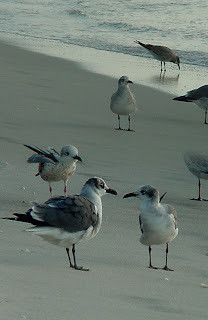 As for the snow birds, January and February are perfectly fine.