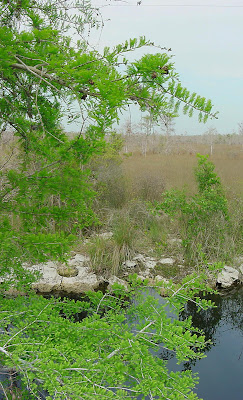 One of the more common meteorological pieces of folk wisdom we are taught early on as children – and recite often through adulthood (at least “up north”) – is that “April showers bring May flowers.”

Even without the presence of any rain, or not much of it, from January through the first half of May.

In fact, it was fire – not water – that was the catalyst for our biggest burst of green thus far. (Ground cover sprouts in a vivid shade of green reminiscent of what you may see at a St. Patrick’s Day parade.)

Without rain, that re-growth will eventually wither on the vine – so it’s not that it isn’t a vital part to keeping growing plants green – it is, it’s just that the primary “curtain pullers” behind the springtime showing of the green are (1) increase daylight hours and (2) the slow warming trend.

You can clearly see the warming trend in the daily temperature graph of Naples, Florida. Winter temperatures bottomed out in mid January at its long-term average daily high and low of 75º and 53º F, respectively.

Fast forward two months later, to where we are now in mid March, and the long-term average daily high is already poised to rise back over the 80º mark. That doesn’t happen “up coast” in Baltimore, Maryland until early June.

Then of course there is the increased sunlight too.

If you believe the saying that “children grow like weeds” … or is it “weeds grow like children,” (I can never remember), then “sleep” to the first is like “sunlight” to the second, as plants grow and green through the power of photosynthesis – and the sunlight hours which fuel it are now growing longer and longer with each passing day.

(Meanwhile, sleepy time hours are receding with each new night for those poor children!)

What would those plants do without us?