We’re in the dry season, right?

But terrestrially speaking, the wetting front is still out there, lurking in full view:

It’s just not up in the pinelands anymore,

But on the flip side, you don’t have to go hunting for it in the deep cypress.
.

.
For that reason, I call the time of year between November and early February the hydrologic interregnum:

It’s a hydrologic transition when the outgoing wet season – the “lame duck” – has lost its primary contributor – the summer rains – but when the ground is still wet (or mostly wet). 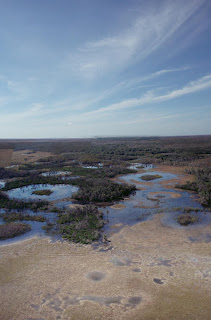 .
The term “hydrologic interregnum” is just a fancy way of saying “winter drydown” or “dry-season recession.”

In fact, it’s a word I borrowed from the political arena:

Proper use of the term “interregnum” describes the “transition period between a new president elect winning the election (on Nov 4) and inauguration day on January 20th.

Coincidently, the two sort of coincide with one another.

But the political one is exact – 77 days (2.5 months), and only happens every 4-8 years when a new president is elected.

The hydrologic one is fuzzy (it varies by habitat type, and from year to year, and depending which part of Big Cypress National Preserve you are standing), but it does occur ever year – unless we have a really wet spring.

Which leads to the question, when will this year’s hydrologic transition end?

It depends on three factors: (1) how high waters peaked, (2) how late in the fall they did so, and (3) how much early dry season rains we get. (Some people also add north winds as another factor, which have descended on us at a steady clip since late October.)

This year waters peaked high, but relatively early in the summer (following Fay). That gave the dry season an early start which – to date – has lived up to its name:
.
It’s been mostly blue sky and no rain.

But to answer the question,

The pinelands “hydrologic interregnum” was the shortest, lasting only 3 weeks after the meteorological dry season started.

The wet prairie “interregnum” will end next, but probably won’t happen until sometime in January.

After that happens, the terrestrial dry season has officially begun:

Water is no longer in easy view.

You have to go hunting into the tall cypress (and beyond) to find it.