Here’s a video clip – sent to me by e-mail – of a catastrophic culvert collapse somewhere in the heart of the north country’s springtime peak.
Does the old analogy about a tree falling in the woods also apply to a tree falling into a stream and then being sucked into an under-designed culvert?

Had it not been filmed I would say “yes.”

And even if no one saw (or filmed) it happening, there’s probably a hydrologic monitoring station downstream to prove it (assuming the gage didn’t get washed away in the flood)!  My point is that if you didn’t see this happen for yourself with your own eyes, it would be hard to imagine the height and force of the freshet that caused it … even if you arrived just a few hours after the collapse. 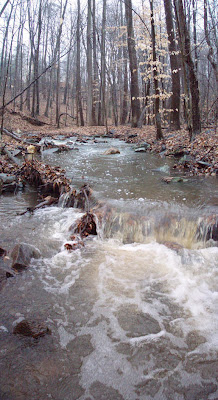 The footage makes me second guess my bias toward “garden-variety” seasonal peaks. Sure, they are important, but it’s often the 25, 50, and 100 year events that are the big morphological “movers and shakers” of the riparian corridor – in this case collapsing a culvert, but in other cases, reshaping sand bars or bypassing oxbows.
What’s the saying about the majority of road accidents occurring close to home?

The same applies to our water ways.

No matter how familiar we think we are with a nearby water body – even down at our favorite creek – when waters rise high and run strong, take a step back and use the precautionary principle.