The swamp isn’t really this bumpy —

Or actually it is … at least, that is, if you have the eyes of a water drop.

What the human eye sees as nothing but “flat as a pancake” a water drop intuitively gravitates through – funneling into its wide Liliputian canyons at the height of the rainy season and then becoming captured in its deep-water domes and still-water strands as winter water table drops.

Freshwater feeds into the 10,000 Islands estuary during our flow season: 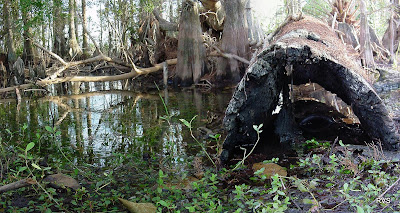 But that’s over now.

Where waters remain it is “still and silent” and soaking in.

The swamps are as spongy as they are bumpy …

At least, that is, through the eyes of water drop.