By early February, the swamps are usually on their annual path down the wetland ladder.

Just five rungs tall and standing only a meter high.

The mesic flatwoods are perched highest – way up on Rung 5 – better known as our pine islands and hardwood hammocks. While “high and dry” most of the time, water does invade ephemerally into their shores during the few short weeks we call “peak water.”

Some years – such as this recent summer – they barely get wet at all (other than rain).

Down a step on Rung 4 are the hydric pines. They shallowly flood with a few inches of water in the late summer and fall.

On average they stay wet for about three months per year …

Say from August through October.

Halfway down the ladder on Rung 3 are the marl prairies. They fill up shin deep at their peak in summer and early fall,

Say from late June through February. 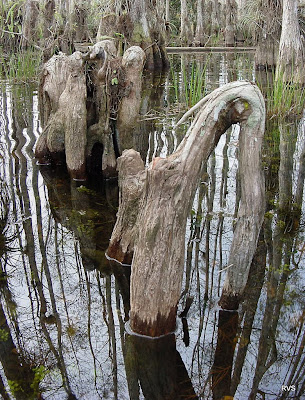 At Rung 2 are the tall cypress where waters rise nearly knee deep and staying there three seasons long (summer, fall, and winter).

But by March most usually they are dry.

Down on Rung 1 you’ll find the pond apple – our so called “swamp forest” – and larger sloughs. This is where the swamps stay wet longest, run deepest, and most of all “run” – or rather “flow” – in the form of sheet flow during the peak water months of summer and early fall.

By April, however, they too are a shadow of their watery selves.

On the “ground” (or in this case, “water”) – where the ladder stands – are the small isolated pools we call dry-season refugia.

These are waist deep in the wet season (even deeper) and where water survives the longest come spring – concentrating fish and congregating wildlife around a receding moat of mud that either dries up completely (in May) or replenishes anew with the summer rains that start up towards June. 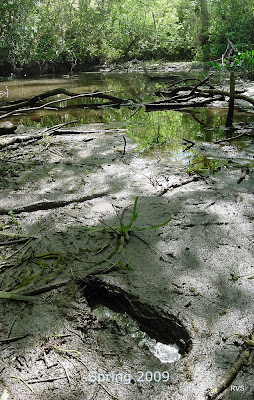 Where on the ladder are we now?

As wet as Rung 3 seems now,

We were calling it “prematurely dry” at the same level back in November.

The ladder to the swamps is not without its seasonal surprises.