As much as I’ve been hearing that decades run from 1 to 10 (insinuating that the one we’re in doesn’t end until 2011),

The much anticipated turnover of the millennial odometer to “double zeros” ten years ago (and who could forget the lead up of the Y2K scare) in my mind marked the bold beginning of a new decade.

Now that the “double 0hs” are done, it’s a chance to look ahead, in eager anticipation, to the 10 “tens” (or “teens” or whatever it is you want to call them) to unfold in front of us.

But that will take time …

More than 5.3 million minutes to be exact (and yes, I rounded up).

If you have a minute (or two) of that million to spare, here’s a look back into the “water cycle that was,” double zero style (as shown below).

Memorable moments for me were the drought of 2001, the wet spring of 2003, the instantaneous fill up of the swamps in June 2005, and the “clock-rewinding” continental burst of dry season rain in February 2007.

(Other’s come to mind, but I don’t want to use up my minute!)

And of course we can always count on the cypress getting their knees wet for a solid half year – usually more. 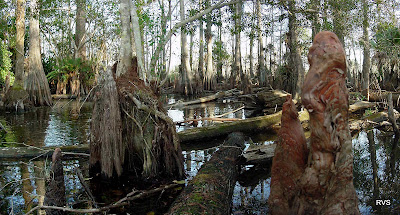 Not surprisingly is the loneliness of the 20-year median plot (as shown by the dotted white line). I’ve been here over ten years and have yet to see a so-called “normal” year; others I know have been here longer and say the same.

One of those people repeatedly reminds me that “abnormal is the norm for south Florida’s water year and ‘averages’ do not apply!”

That’s why I’ve switched over to the “median” instead.