Once upon a time, the Kissimmee Valley was a chain of loosely-connected isolated lakes separated by a marshy expanse. Unconnected was the operable term. It simply wasn’t a place that drained very fast. Farther to the south formed two lakes, one called Kissimmee and the other Istokpoga. The waters made its journey from Lake Kissimmee to Lake Okeechobee by way of 103 miles of meandering river that often overflowed its banks and filled the floodplain. Lacking a similar river, Lake Istokpoga sent its water to Lake Okeechobee through a grassy waterway dotted with tree islands that resembled a miniature version of the Everglades.

And then came channelization.

The modern-day Kissimmee Valley still drains into Lake Okeechobee, just like it always did, but the journey from Point A to Point B is largely through canals, and you guessed it – as mediated by a series of regulation schedules. Channelization has made the Kissimmee both more navigable and drier than its previous self, and also affected water delivery and quality to downstream Lake Okeechobee. The good news is that starting the 1990s restoration work has been done to redivert and resuscitate flow back into the nature river channel that the canal and levee works shut off.

Even so, drainage has dramatically changed the lakes. Prior to channelization, large rain events swept away sediments that kept the lake bottoms clean and fed nutrients into the wetlands below. Today, the lakes are maintained a at a lower level, and with less natural variability, causing an accumulation of sediments in the lakes.

There are no images associated with this tag.

Here’s the view of the Caloosahatchee River …

Looking upriver from the bridge at LaBelle.

Today it is the dredged and widened Okeechobee Waterway, navigable all the way to Lake Okeechobee.  Prior to drainage, however, the channel was narrower, oxbowed, and stopped well short of that mark;

About two miles upriver at Ft. Thompson Falls to be exact.

The falls were the natural dam the flooded Lake Flirt and Bonnet.

How can this south Florida lake be so high?

Usually by February the water table has gradually moved down, but in this case — in Lake Istokpoga (just north of Lake Okeechobee — the water surface is sustaining itself at its October peak.  The trick is partly its regulation schedule and partly that the lake isn’t really high.  The light blue vertical band to on the left hand side of the graph depicts the historic “up and down” range of the water surface.  Today, in accordance with modern day regulation schedule and the water controls that implement it, Lake Istokpoga’s water surface is maintained between 37 and 39.5 ft above sea level, a relatively tight 2.5 ft range.  Compare that to pre-water management days when the lake rose over 42 ft above sea level, flooding the adjacent landscape and feeding down into the Big Lake.

What looks high by today’s standards was low back then.

I rode over the Kissimmee River a few months ago during the start of the dry season.

While stopping to take a few photos of the river, I duly noted — by the signage on either side of the bridge — that I had passed overtop the imaginary line in the sand (or in this case, the river) that separates Okeechobee from Highlands Country. 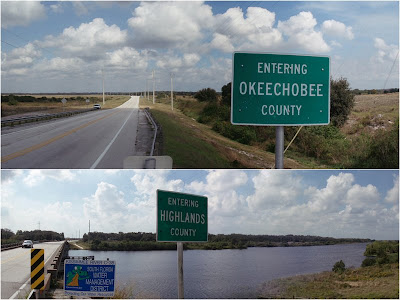 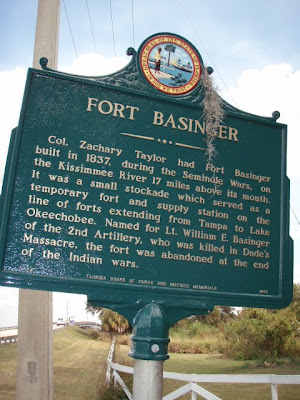 That sign rang a bell in the back of my mind earlier this month while reading an article in the Treasure Coast Palm on the Battle of Lake Okeechobee.

Today the battles aren’t around the Lake, they are on and about the Lake …
In trying to figure out what to do with it’s waters — for the Everglades downstream, the estuaries on either coast, the levee that surrounds it, water supply to the east coast and farmers, nutrient enrichment, and the wetlands that lie within.

How has the Lake held up in the 6 months since Fay has passed?
Water stage wise, it’s lost two of the four foot rise that Fay bestowed to it overnight. Volumentrically, that translates into a loss of 1 million acre feet from it’s 4 million acre foot mid-September peak.

How much is 4 million acre feet you ask?

That’s approximately the same volume of oil pumped from the earth each year.
Or if you’ve ever seen Lake Mead recently (it’s 100 feet below peak stage of the late 1990s), it’s about a quarter of the volume of water behind the Colorado’s Hoover Dam.
Of course Lake Mead is much deeper — Hoover Dam stands 726 feet tall!
Compare that to the entire state of Florida.  It’s highest point is 345 ft above sea level, the lowest high point of any other state.
Lake Okeechobee must rank as the shallowest of the the world’s larger lakes: it’s only 20 ft deep at its deepest point …
And that’s on a high water day!
Watersheds