When it comes to the long-awaited Tamiami Trail Project all three apply.

It is a “milestone” that literally lives up to its name.

The bridge that will result is one-mile long.

And to call it a “ground breaking” is also factually correct:

The bridge will replace an earthen berm that for decades has blocked water from flowing into northeast Shark River Slough and downstream towards Florida Bay.

But most of all in my mind it is a “ribbon cutting,” which figuratively, can be thought of as a giant pair of hydrologic scissors being used to cut a thin swath in the iconic “ribbon of asphalt” better known as the Tamiami Trail …

For the purpose of sending more slough water south.

You may well remember that it was just a year and a half ago that the same Tamiami Trail celebrated its 80th birthday.

It’s designation as a “trail” is a constant point of confusion for new visitors – perhaps leading them to believe that funny name on the map could be an unpaved footpath. We all know that the name takes historic root from the now century-old rally cry (circa 1915) to bridge the impenetrable and endless expanse of glades and swamps that lie between the south peninsula’s two coastal population hubs – Tampa and Miami.

By that token, the term “trail” is a perfect fit,

Those who built it were pioneer “trailblazers.”

Over the decades, the Trail became more than a path for moving people from coast to coast. People settled along it, and in the case of the Everglades, water works were retrofitted around it.

Starting in the 1950s with the Central and South Florida (C&SF) Project – a 25-yr project to re-engineer water in the Kissimmee-Okeechobee-Everglades flow way – the Trail was transformed into one of its main arterial conduits and assigned a confusing array of numbers along its path.

Fittingly the project commenced to start last Friday in the shadows of Structure 333.

Yes, it’s the one-mile bridge made the “splashy” headlines in the local newspapers, but the pivotal design feature is much more pedestrian:

Hauling in limerock to raise the road for the other 10-miles two feet higher.

It’s that step that will enable water stage in the canal the S-333 feeds to rise high enough to finally flow south (through the culverts and the new one-mile bridge) into Shark River Slough’s northeast corner and onward down into the estuaries and Florida Bay. 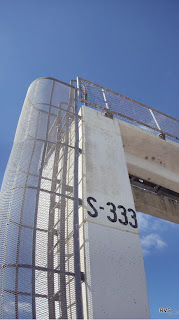 The Everglades is less one big water work than it is a hydrologic machine in motion. Operational rules and infrastructure propagate water through the system in ways that makes the status quo hard to shake.

It’s a “mile marker” on the grassy river of restoration to come.

(The project is scheduled for completion in 2013. Click here to view the USACE press release on the event.)