Corkscrew swamp famously escaped the saw …
That means its giants have roots reaching hundreds of years down. 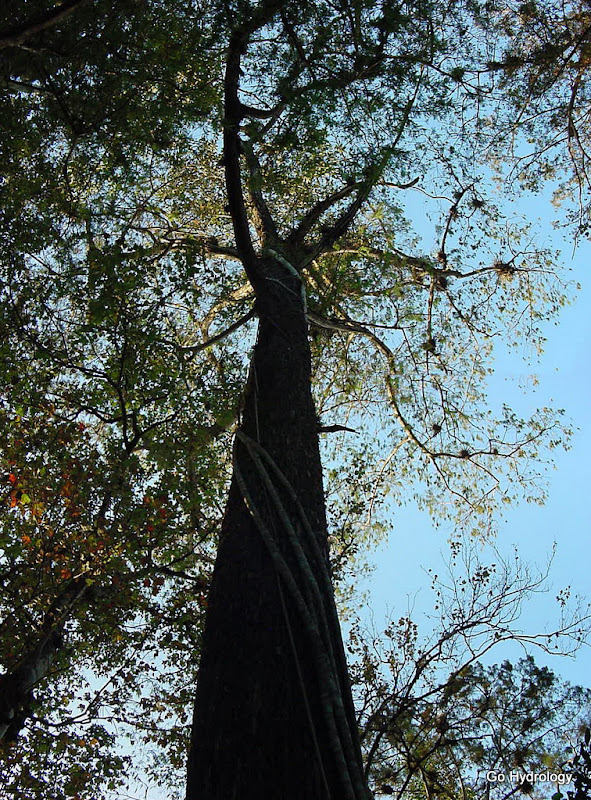 But did its hydrograph also remain similarly unscathed?

Seasonal trends of the summer wet and winter dry area easy to see.

However, decades ago (left) the swamp seemed to show a more predictable pattern: Yes, there were flood and drought seasons, but the darker band between the 33rd and 66th percentile is much tighter (on the left) than what’s seen on the modern day hydrograph (right). Particularly noticeable is the wider range of fluctuation and deeper drop of the modern day (right) spring drydown. Less obvious, but also present (if also counterintuitive, although also explainable), is the modern day’s higher wet-season hump.

Climate could be in play. We’ve had some wet summers in that period (1995, 1999, and 2005) plus a big drought during 2000-2001. Also a factor is the landscape around Corkscrew which, unlike the sanctuary, and despite the great success of the Corkscrew Swamp Regional Ecosystem Watershed (CREW) initiative, conservation efforts have tended to focus on low-lying wetlands (i.e., in the adjacent Corkscrew Swamp Regional Ecosystem Watershed) whereas uplands have been converted into agriculture or urbanized.

All things being equal (meteorologically speaking), that leaves less land for the same amount of water; or in other words, higher peaks in the areas that still hold water and lower dry season drops due to the spatial loss of storage.

Still, this is the week to be thankful for what we’ve got and everyone over the years who did there part to make it happen.

The swamp has a way of reminding me that whenever I’m there.