I’m not sure how Florida got the name “The Sunshine State?”

But I think everyone now knows how it lost it! 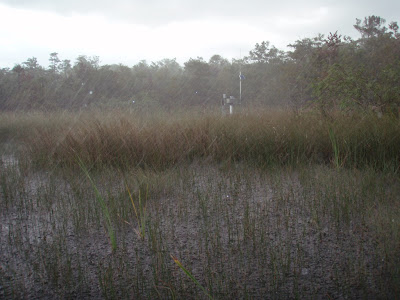 From here on out, Florida will be remembered as the Fay State.

Unfortunately that cannot be helped:

NOAA pre-determines the names at the beginning of the year. It’s luck of the draw from there how large it will grow, how windy it will blow, which direction it will meander, which tides it will ride onshore with, how much rain it will drop, …

And in the case of Fay:
How many days (weeks) it will stick around in Florida?

Whoever gave Florida such a long coastline (1,350 miles) was just baiting trouble with the Tropics. Notice how the founders of Georgia minimized total coastal exposure to 100 miles. That was prescient planning, if also not also a fair stroke of geopolitical good fortune.

And all those old style Florida maps that highlight the tourist attractions in exaggerated proportions – you know the ones that I’m talking about: they have Disney World in the middle, game fish leaping across the 10,000 Islands and out of Lake Okeechobee, water skiers zipping across the springs and rivers, giant troves of wading birds and alligators in the Everglades, giant groves of honeybell oranges up the Ocala Arch, sunbathers along the coastal beaches … and inevitably, somewhere smack dab in the middle, a giant sunshine glowing over the whole thing. 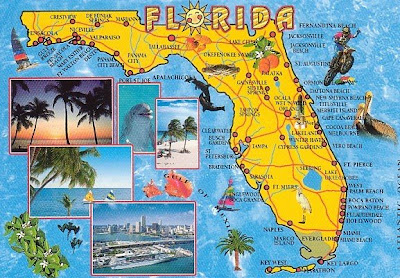 Well, notices have been sent to Florida printing presses everywhere:

All future reproductions of such maps will from this point forward cover up that radiant sunshine with a giant cyclone, and sprawling feeder bands will blot or flood out the rest of the attractions.
.
And mapping accuracy is of no concern: Fay hit every part of the state. You can’t be wrong no matter where you put it. 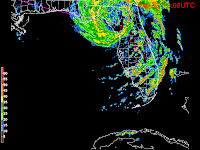 I know the forecasters are calling for Fay to gradually move west, and eventually say good bye to Florida.

But I’m starting to think that Fay has become a permanent fixture of the great state of Florida: sort of like the Giant Red Spot on Jupiter.

They say that Jupiter’s spot is a meteorologic phenomena too, and that its persisted for a good billion years or so.

Let’s hope that’s not the case with Fay.
A full week has been enough.

Probably the only good thing about Fay is that once it’s gone it won’t be coming back: The name Fay will be retired into the Hurricane History Books.
.
Add another permanent retiree to the great state of Florida!