The goal on discharges down the Caloosahatchee, into the estuary, down from the S-79 WP Franklin Lock and Dam is to get it “just right.”

What is “just right?”

The optimal range is between 300 and 800 cfs. That’s the “skinny dark gray” line if you’re looking at the data calendar above.

The management goal, from the perspective of a monthly mean, is to keep freshwater flows between 300 and 2,800 cfs. That means anything color coded “yellow” or higher is too much and anything coded as a “skinny light gray” line or lower is not enough.

This year so far the S-79 has been below that magic number, but has let loose around 300,000 acre feet in the process.

That adds up to 120 Empire State Building sized glasses.

Compare that to 1998 when five times that amount of freshwater (720 Empire State Buildings) discharged into the Caloosahtachee estuary from January through April. 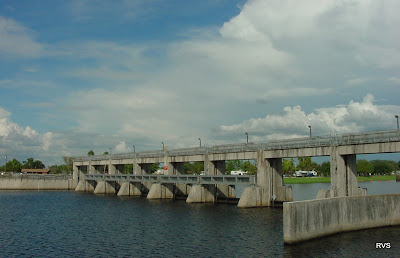 It’s 2005 that was the big flow year on record (thanks to a 20-inch June rainfall tally and an active hurricane season).

All said and done that year added up to 1,600 Empire State Buildings.

Or in Acre Feet almost 4 million.

That year was also the “knock-out punch” on three consecutive years of mega freshwater discharges. The duration and magnitude of those “blow out” events is shown by the “fat gray-shaded bands.”

Since then flows have mostly fallen
in the acceptable range …

What’s the recipe for sustained optimal flows? More upstream storage for one …

Until then a good amount of luck from the weather will have to do.