I never tire of seeing one in a cypress dome,

Even if they are a fairly common sight.

Only at this particular spot — just across the east side of the L28 Levee — they were shockingly abundant, which had me scratching my head as to why?

Could it be because the water there is a foot deeper and almost never goes dry, thus making for a more perfect micro climate for them to grow …

But that’s only a hunch. 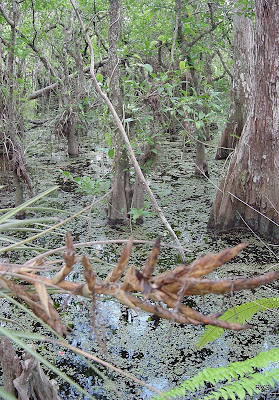 Then I noticed that the depth of water in the cypress dome was actually shallower than the surrounding prairie, by a good half foot.

That’s in contrast to what I normally see on the other side of the levee in the Big Cypress proper:

Water pools in the cypress even when the prairies go dry. (See video)

There’s more questions than answers in the swamps …

And almost as many Cardinal plants!