Florida is the land of oranges,

But you won’t find any in the stores now … at least not the natives. 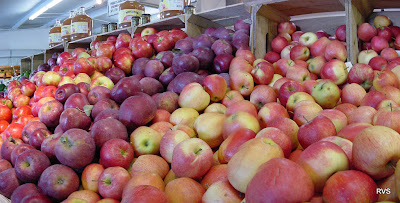 That will be changing in the upcoming weeks now that weather has cooled.

In the meanwhile, you may have noticed the prolific presence of another fruit on the racks:

One fall long ago I visited my brother in the Hudson River valley.

I had just returned east after living a few years in the Sonoran Desert corner of the Great American Southwest studying (you guessed it) water.

The back story is that Arizona didn’t have any (water), or not much of it – the few drops they did have were more precious because of it.

The natives always scoff indignantly. “Of course we have seasons!” they’d sternly rebut followed by a subtle litany explained in condescending overtones.

Regardless, I found myself routinely pausing in thought during my entire stay in Arizona trying to remember what month it was …

“Is it April or August?” In any event, I arrived at my brothers doorstep after a five-hour drive from Cape Cod, not so much in a state of “time out of mind” as I was a “mind out of season.”

Opening his fridge, I was shocked to see apples packed everywhere – up on the egg racks, behind the butter, in every unused drawer.

I grabbed one instinctively and proceeded to wash it under the faucet.

“They’re pretty good,” a voice deadpanned from the other room, “unless you want to wait until spring for them to get really ripe on the vine!” Confused, a bit embarrassed, but hungry – I ate that apple.

Thinking about it days later I broke out into riotous laughter (and for a few years running it became a standard joke between my brother and I):

Of course the apples were “alright to eat” – it was October, in Dutchess County, orchards everywhere:

“What part of fall didn’t I understand?”