Where are the Everglades?

They are right there where you are standing.

But how about when you’re bouncing along in a buggy under the cypress swamp next door?

They call that the “western Everglades.”

Then again I’ve heard the Caloosahatchee – 70 miles away – called the same.

Texas has the same conundrum with the Big Thicket,

Or just “the thicket” for short.

You can point to it on a map, and along the side of the road signs will point you to Big Thicket Nat’l Preserve, but where its heart lies and how much land (and water) to include – not to mention the acreage that’s been lost to farming, logging, and population growth – is intermittently debated (as occasion allows), but rarely resolved.

Back home in the Everglades I know when I’m leaving the Water Conservation Areas because there’s a levee that tells me so. 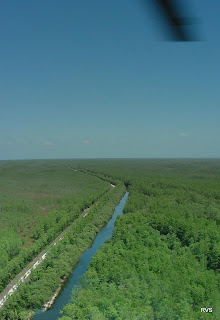 Everglades proper is on side and its western cousin – Big Cypress Swamp – is on the other, even if to the untrained eye they may look the same.

You won’t run into the same problem on the East Coast Perimeter Levee!

It’s river of grass to the west (not to be mistaken with the “western Everglades”) and a sea of houses to the east, in what once was the Everglades.

Where then lies the heart of the western Everglades?

If you stick me in a swamp apple forest waist deep in the Fakahatchee, the term “Everglades” doesn’t so much conjure up images of an infinite marsh, as it does that of an old lime rock road – called Everglades Boulevard – which cuts through the old Florida heart of the Big Cypress Swamp. 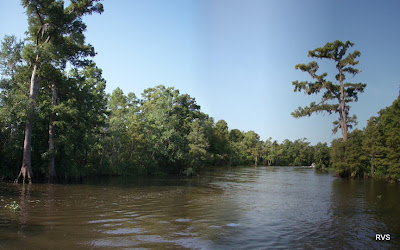 And on a recent trip to East Texas along the banks of the Neches River, within the bounds of Big Thicket Nat’l Preserve, and possibly near the ambiguous heart of “the thicket’s” elusive core, I wasn’t thinking “Everglades” then either, although I must admit the hardwood forests (called the bottomlands) of the swampy floodplain infused me with a soggy sense of déjà vu:

Can’t we just call it The Big Cypress instead?