Or does October have one last hurrah?
Rain Or Shine Report for October 5th 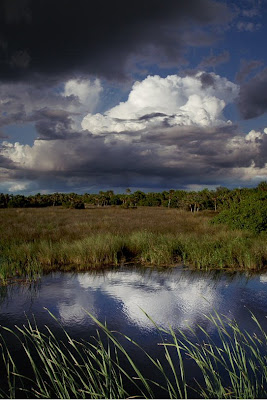 Question:
Is October a wet season or dry season month?
Answer:
While I hate to waffle (even though this is an election year), I will go out on a limb and say it depends on where you’re standing in the great state of Florida.

.
First off, wherever you stand in Florida in October, you’re just a tropical wave of tropical moisture away from a good old-fashioned wet-season drenching.

Twenty percent of hurricane-strength storms to make landfall in Florida occur in October, and that can occur anywhere. And don’t forget that it’s often the no name waves of tropical moisture that end up underwriting a wet October.

.
But if you find yourself standing in Naples, which I am right now as I type, I’d be compelled to call October a transition month.

October 1st has all the markings of 100 percent wet season that was.

But come October 31st, the wet season balance of power has tilted 100 percent in favor of the dry season that will be.

Over the past 10 years, south Florida’s southwest coast has averaged around 3.5 inches of October rain. That’s not too far off from the 2-3 inches of rain we typically associate with a dry season month.

.
Now if you find yourself standing in Miami, October doesn’t have all that much of a “dry season” ring to it.

Over the past 10 years, Miami has averaged 6-7 inches of October rain!

.
That’s twice the October average of the Kissimmee and Lake Okeechobee basins.

And you don’t have to go back too far in the record to see some real October chart toppers for Miami.

And the first week of this October has not disappointed, dropping around 4 inches of rain in Miami and up towards Loxahatchee near West Palm.

.
Finally, if you find yourself in north Florida, up near Tallahassee, October – with its 3 inch average – is the closest thing they have to a dry season. The rest of the winter and spring is subject to the repeated sideswipes from the continental fronts sweeping across the country.

Tallahassee gets 5 inches of rain per month during most of the winter and spring. Compare that to south Florida’s 2 inch per month dry season tallies.
.
In summary, — and to answer the question of the moderator – I’d say yes, October is a month when it may rain, or may not, depending on where you are standing; but always remember (and always be safe: never stay outside during a severe storm) that the great state of Florida is home to the greatest water cycle show on earth.