Parts of the swamp have flooded back up into (and across) pinelands. Preserve-wide, shin-deep water has a steady foothold throughout our marl prairies.

You may remember us ending our summer “wet season” on a dry note:

The wetting front dropped out of the hydric pines early – by late October – followed weeks later by its seemingly unstoppable demise out of the marl prairies and into the low-lying cypress.

The months that followed have been wet by “dry season” standards.

The March is in fact “wet season” worthy if you factor in that the “evapotranspiration knob” is still on low.

Does that mean we’re just one big storm away from getting washed away in never before seen hydrograph territory (aka Hydro Incognito)? 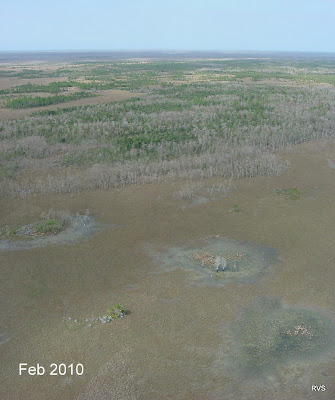 The same way that weather forecasters predicted the big November storm (that started it all) coming two weeks in advance,

Word from the Meteorologic front line
Is that our recent deluge was our wet winter’s Last Hurrah:

El Niño is wilting on the atmospheric vine
and the Jet Stream is moving north.

Or in other words,
We may get a dry season yet!

(Could the next big rain to drop down into this swamp station
be the start up of summer wet season in late May?)