Winter usually doesn’t work as a “noun” in Naples Florida as it does, say, up north where it descends on the continent for a full season.

People “winter” in south Florida (as in the verb),

But they don’t expect to feel “winter” (the noun) when they visit.

Naples gets a handful of cold days to be sure – which we like to think of as “winter” – but in truth we use a “sliding scale” that is laughably warm by our “snow-birding” winter guests:

Winter by our rules is any day that doesn’t break above 70º F.

On average we get just under 20 such days per year. 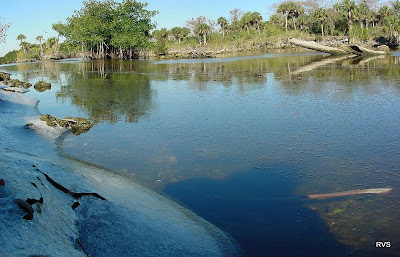 That’s why this January has been a shock to residents and snow birds alike.

A visiting Norwegian – having arrived only days earlier – declined to go for a walk – “The air’s too cold” she sighed; at dusk a Canadian (apparently the only one suited to do so) was out covering the community flower bed in a last ditch bid against the morning freeze, and the next morning a native Floridian was struck by the peculiar look of a nearby canal.

“What’s that scummy stuff on the surface,” he wanted to know.

Twelve days into January we’ve only had one rise above the telltale 70º F mark.

That’s unheard of on the south peninsula.

Decades in the waiting south Florida finally gets a true taste of winter “the noun.”